Home on wife’s birthday
A Dutch seafarer, Captain J. Groothoff, who arrived at Wellington in the Wanganella on January 15 from Sydney is in a great hurry to get back to the other side of the world. He has promised to be in Ireland by February 21, the birthday if his Irish wife (writes the “Weekly news”).

Captain Groothoff, who is still a young man, served 27 years in the Royal Packet Navigation Company, the premier shipping line of Holland. He has left the service in accordance with the company’s policy of retiring its officers at the age of 45 to make room for the generation of sailors coming forward.
An other reason of the captains haste to return to Ireland, he told a representative of the Dominion, is that he is anxious to get on with the planting of the new season’s potatoes at his home overlooking Dublin Bay. He recently completed a voyage as a passenger in the Finnish barque Passat, from Copenhagen to Port Victoria, South Australia. The love of the sea, which never dies in a sailor, called him away from his happy little home and his cabbages and potatoes.
Captain Groothoff’s wife allowed him to go on one condition – that he came back in time for her birthday. “I wouldn’t fail in my bargain for anything in the world”, he said in explaining that, much as he wished to see New Zealand, he was able to make only a fleeting visit. He sailed from Auckland in the Rangitata on Friday. He is due to reach Great Britain with three days to spare.
When Captain Groothoff first met the girl who was to become his wife she was a colleen passing through Holland in 1905 on her way back from college in Switzerland, and he a cadet in a nautical school. Romance developed quickly, but the war and Captain Groothoff’s service in the East with his company intervened before their marriage was possible in 1919.
The pretty Irish girl became a nurse with the British Army while her future husband as a neutral served his company on the Cinese Coast in the Malay Archipelago and in the East generally. He rose in the service and on attaining the rank of captain felt qualified to marry his ”little Irish nurse”.
For 11 years they made their home in Singapore, and on Captain Groothoff’s retirement three years ago they bought a place in Dublin. There the captain gardens as a hobby. He is proud of his home and the potatoes, cabbages and tomatoes he grows. 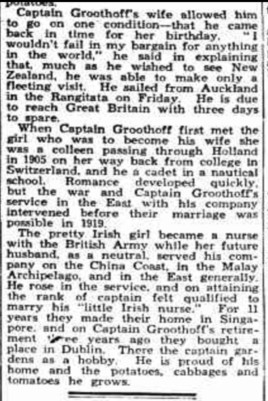